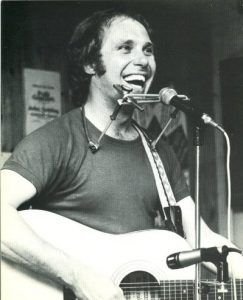 Since he strummed his sister’s tennis racquet & sang his first George Formby song, musical entertainment has never been far away from Shep Woolley’s life. At six he was the leading light of the infant’s school choir. At nine the chief shepherd in the church nativity play (He didn’t watch the flocks all night, because he had to be in bed by 7.30).

At thirteen he was ‘Lonnie’ in the local Skiffle Group. In 1960 He left home, joined the Royal Navy and stayed on the ocean wave for 16 years. During that time, he played in ships groups, produced radio and television shows, sang with Matt Munroe and the Dave Clark Five, danced with Liza Minelli & wrote songs that are now part of Royal Naval history.

In 1974 after an appearance on ATV’s New Faces (which he did for a bet) he decided to drop anchor for the last time, so in December 1975.  He handed in his ceremonial instructor’s boots to the stores at HMS Excellent on Whale Island and marched away!

At this time a new radio station was starting up in Portsmouth. He auditioned, and soon became part of the team of the brand-new Radio Victory where he stayed attached until local politics ruined a first-class part of Portsmouth life.

Although born in the Midlands, he and his family are very much attached to Portsmouth. He and his wife Jenny are both Pompey FC Season Ticket holders, although he admits he carries a candle for Birmingham City. He has made 4 LPs – 7 CDs – 2 Singles one of which, “Pompey Rock” knocked Boy George off the top of the local singles chart. Sometimes he wonders why they never play it at Fratton Park!?

42 years in show biz, still on the road, writing and performing around the world. The only difference since he started is… He’s learned how to tune the tennis racquet!

You can hear him On Angel Radio Monday evenings 5 till 7  Playing all those songs his Grandad taught him and of course, right here, on Victory Online!