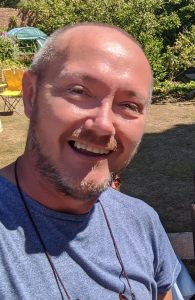 Jamie was born in Portsmouth, Hampshire and took his first job ever at 16 as a DJ at the Roundabout Hotel in Fareham on Friday and Saturday nights which was just after Radio Victory closed in 1986.

He missed the chance at a work experience gig at Victory due to their imminent closure.

He soon got the bug for DJ’ing and began pestering local stations to get a foot in the door! Jamie managed to get some experience in radio at Portsmouth Hospital Radio, along with colleagues at Victory.

Jamie married Rachel, in 2013 after first meeting her and having a brief romance in 1991, what a fast mover!

Blending a full time day job was not easy having a young family either, in his twenties Jamie moved into nightclub DJ work often covering four nights a week at Martine’s in Southsea, then onto other worthy establishments who’s names are just memories now!

At the age of 30 Jamie ‘retired’ from the nightclub scene and his radio roles and settled down in to some serious day work which included Operations & Project Management and then finally Compliance/Health & Safety.

He decided in November of 2020 to stop working in a role he wasn’t enjoying and to focus on positives like his love for music and radio.

Jamie has been back on the radio presenting on the local rock station Flash (Portsmouth) and also W.V.R – Digital in Bucks for some time now. 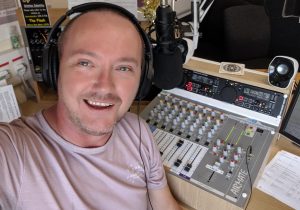 Favourite thing to do: When not on the radio, spending time in the garden trying to defeat the weeds and grow his own fruit and veg!

What irritates?: People who slow down before taking the deceleration lane at motorway exits. Grrr!

Favourite Musicians: Hall & Oates, been to see them in concert several times in the UK and USA.