Tagged as 70s, Something For Everyone, Strictly 70's 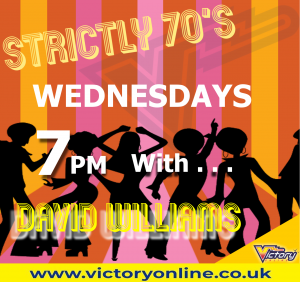 The Seventies probably had more variety when it comes to styles of music than any other decade. Prog Rock, Glam Rock, Reggae, Country, Folk, Punk, Disco, Soul, Two Tone, New Wave, Funk and more....and you can hear them all on Strictly Seventies.

Join me David Williams as we remember some One Hit Wonders, play a Seventies Original (an original version of a song covered in later years) and a Tape Oddity – one of those tracks they could only get away with in the Seventies.

Let’s head back in time – to the decade of Lava Lamps, Choppers, Space Hoppers, C60 cassettes and chunky knit cardigans.

Wednesday evenings from 7 and repeated Sunday afternoons from 3.

Like every job and hobby he has ever had, David ended up in radio by accident. When most kids were doing a paper round (remember those) a 14 year old David was in the local radio station answering phones and filling in music logs.   Always interested in the technical side of radio, colour blindness prevented him becoming an engineer […]