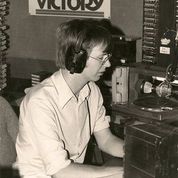 Kevin moved to Portsmouth in 1980 to train as a nurse at QA Hospital, but his interest in radio started as a young teenager in his bedroom! He listened to radio on an old AM radio under his pillow, and then Radio Victory came on the air in 1975, and he was fascinated. Kevin volunteered at his hometown hospital radio in Chichester, and after moving to Pompey joined Portsmouth Hospital Broadcasting (PHB).

Although he doesn’t remember how it came about(it was probably during a beer or glass of win with Anton!), he ended up volunteering at Radio Victory while working as a nurse! Yes, he had the radio bug and became good friends with the likes of Anton Darby and Chris Rider. It was at PHB that Kevin became close friends with Mark Samways, and their passion for local radio was the catalyst that would become a life long friendship.

After Victory lost it’s license in 1986, Kevin formed Portsmouth Community Radio Association, a group that continually lobbied the broadcast authorities to give Pompey back a license. Mark and Kevin soon joined forces that resulted in a series of RSL’s in the 90’s, Victory FM. Kevin was a senior nurse at that time, and with the need to feed his kids (he was a single Dad by then), he had to focus on that. However, his friend Darren introduced him to the boss at Wey Valley Radio in Alton, David Way. David offered Kevin a job he couldn’t refuse!

Kevin’s heart though was always in Pompey, and when the license was gain for 107.4 in Portsmouth, he came back. Although Kevin was fired by the group that purchased the station, he went on to work at BBC Radio Solent–however poor health was not Kevin’s friend during this time, and he lost his job there. Well, you know what they say, you can’t keep a good man down, and he was approached to work at Express FM in Portsmouth, with a remit to fix the station–and taking the philosophy behind Victory and applying it to a modern day station, he did just that.

Express FM continues to this day, a fact that Kevin is proud of. Kevin met his soul mate in the early 2000’s whilst on a trip to America, a land that spoke to him–it wasn’t long before he moved to the USA. Kevin now lives just south of Seattle, and runs a group of stations in the Washington State capital, Olympia. When asked to join and assist the team at Victory Online, of course he said yes. You can take the man out of Pompey, but you can’t take Pompey out the man!